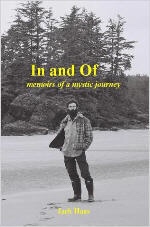 I have described these events in my life as they occurred and had effect upon me, and as I came to understand them within my limited scope, but I know also that what befell me was only partly a result of who I was and my individual destiny; it was also, perhaps largely, a function of the whole and therefore due, for the most part, to needs and reasons of which I am completely oblivious. This undivided show is so gigantic, so astounding, that I do not claim to know truly what my role in it has been, nor what it is all about. Though I do know that it is certainly about something.

What happened to me may have occurred because I am perhaps on the last round of my earthly incarnations and have needed to acquire all my missing fragments into one so as to become a circle and a whole. Or perhaps it was all due simply to my intent, which I formulated at a time when I did not understand the power of such a conviction- the intent to return to God-freedom and, if possible, to take as many others with me as I could. This may in fact have been the modus operandi behind every serendipitous encounter, every realization, every grace, and blessing bestowed upon me over time.

Or perhaps I was like one who comes down to earth for a brief spell as a lost particle from the other side, so as to inform others of a lost aspect of themselves, and also to retrieve their missing kin. Like one of those falling stars who so dazzle themselves in the passion of their ephemeral descent that they forget to put the breaks on, and to join into the realm of being. And yet I came to the consciousness of my imminent, destined melt-down, and fell only to the point of burning. That was when I grew wings, and, like the great Phoenixes of old, arose from my own ashes, but instead of flying off I simply glided down, landed upon this fair earth, and began singing my song. In doing so I slew the Death which had come for me, and brought to earth my new Life. Configurations change, events modify events, and if one thing moves the rest must move with it.

We only change the world by changing ourselves. Nothing we do ever truly exists in isolation. There are no absolutely personal nor autonomous actions. Everything exists as part and parcel of the whole, and no one person has a life divorced from the rest. It is the recognition of this which eventually allows the surrender of arrogated, specific personal attributes; it allows the ego to soften and flood out in the acceptance that there is no action which is not an action of the whole, and therefore what we are is not the separate, striving selves we think we are, but are instead living threads in a dynamic fabric which shifts and alters as one event, though the apparent parts imagine an apparent existence apparently divorced from the rest.

What we feel and think inside is irrevocably bound by invisible strings in the invisible connectedness of all beings and all places. And so, in the end, we realize that our thoughts are not our thoughts, nor are our feelings our feelings, for they belong to the whole, and our self is simply our closest proximity to the Self, which, at the center, we all are. And thus it is only through the self that we get to the Self, which is the spot where there is both unity and separation.

And so the paradox of this partial and impartial Self, which we are, lies in the acceptance of duality and its enterprises; the paradoxical duality- a part of, and apart from, the whole- which is the fundamental reason why, at the very core of things, everything we had experienced at the periphery becomes inverted: in and out change places, cause and effect merge, subject and object blend in and are abolished, and the less you become the more you are.

Ambiguities never cease to persist in life, nor do contradictions, alternative explanations, aberrant cases, and incoherent experiences. There is no logical system which can encompass, condense, or convey the multifarious exigencies synthesized into the all. Where pattern and principle break off, that is where life begins.

This is why things go haywire when you’re heading towards the core, because the closer you get to the center, the more duality becomes apparent, for the spokes are closest right at the hub, and therefore the divisions and the One exist side by side; here a person finds the almost simultaneous occurrence of love and hate, like and dislike, light and darkness, and failure and victory.

As the moving periphery approaches the motionless center, an inversion occurs at which point longing only leads to further distance, desire creates more loss, hope begets despair, and only surrender and faith lead towards the immanent aristocracy. These contradictory qualities are at the center of the spinning wheel, which the circumference can never get to nor understand, and therefore whomsoever lives out on the feverish radius exists only where the world of effect happens so slowly that the immovable cause remains obscure.

It is only when you stop completely that you fall back inside and witness the evolving universe from the revolving hub; and it is only then that separation turns into union, pain into laughter, death into life, and the kaleidoscopic manifest betrays itself as but the splintered fragments of a singular white light dispersed outward through the prism of the self.

I recognized this metaphorically one day, in a round-about way, during the biological contract which I had worked, looking for Murrelet nests, as I explained earlier.

The job itself was quite straight forward: one individual would shoot an arrow, which had a spool of fishing line attached to it, over a tall, old-growth tree, hoping that the line would drag over a sturdy branch during its passage. Then his assistant, which was myself, would go and find the arrow, cut the line off the end of it, and attach a spool of 4 mm diameter rope to the loose end of the fishing line. This line was then pulled backward, over the top of the tree, by the original marksman. And when he had attained the attached end of the 4 mm rope, he then severed it from the fishing line, and attached an 11 mm diameter climbing rope to its end, which I then pulled back over the tree again, via the 4mm rope, until I had the 11 mm line in hand, and tied it to another nearby tree to create an anchor. Thus, through this procedure, starting with a thin line, we ended up with a strong climbing rope over the top of the tree, upon which the climber could ascend to search for nests.

Now, during this procedure, while I was hauling over the 11 mm rope as quickly as possible from my partner’s side to mine, via the 4 mm rope, I had to lay down the 4 mm rope on the ground, trying not to get it tangled up in the thickly gnarled undergrowth of the west coast rainforest. On one occasion, however, I was too careless and when it came time to re-spool the 4 mm, it was in a hopeless tangle. My attempts to unweave it simply created more of a mess. Finally I capitulated, and began the long process of grabbing the entire clump of rope and gently pulling it apart, loosening up the knotted mess a bit, grabbing each free end, and pulling as much of the loosened rope out of the core as possible. This had to be done over and over again. In this way, gently loosening the mass, and then inch by inch retrieving the rope at both ends, I was able to untangle a great deal of the rope. The problem was this- although the free ends were growing and the knot was shrinking, the knot in the center which remained was getting tighter and tighter, until there came a point when it could no longer be gently loosened, because to loosen it would mean dragging one of the free ends back towards the knot, thus eliminating the gain. It was then that I realized this method was finished; it had gone as far as it could, but could go no further.

I sat there distraught and bewildered for having botched up such a simple task, but then a thought occurred to me- now is the time to roll up one of the loose ends into a tight ball and weave it through the central knot. So I carefully gathered up one loose end, rolled it into a small ball, and then painstakingly wove this ball in and out and through the larger central knot, until, finally the whole was untangled.

It was in a similar way that I recognized the necessity of both the oriental and occidental ways in our lives- that both are required if we are to untie the great God-knot in which we are bound. By this I mean that an individual can ease back effortlessly into the macrocosm, the Self, in the time-proven method of the east, but eventually there comes a point when that Self can go no further, for the knotted creation remains, inhibiting any further evolution. That is the point when one must ball oneself effortfully up into the microcosm, the self, in the way of the occident, and weave oneself amongst the tangled fibres of the world, if God is to finally be set free.

View all posts by jackhaascreations